If you’re reading this and you have come across me before, you are might be aware of two things; firstly that I have the reputation of being a bit of a whirlwind – someone who generally operates on a warp factor of 1,000 and also that earlier this year I had what I have since branded as an “NDE” – Near Death Experience.

In May I suffered a cardiac arrest whilst brunching in a New York restaurant and was incredibly lucky to have had my life saved by three other brunchers who happened to be doctors. The ‘sliding doors’ element of what happened is what makes it so remarkable; had it happened the night before whilst I was alone in a hotel room, or that morning when I was doing a HIIT class in my pj’s, or on the flight I was due to take a few hours later or even in any other restaurant that didn’t happen to have three brunching docs in it… I would not be sat here writing this. Period.

A cardiac arrest is different from a heart attack – it comes from nowhere with very little warning and the heart completely stops, not struggles. To put it into context, the survival rate for an OHCA (out of hospital cardiac arrest) is only 10% and to survive without brain damage is just 4%.

So understandably, having stared death very squarely in the face and been given another chance to live, I am someone who has a new way of looking at the world. Sure it’s no surprise to hear that many of the things that I used to attach so much importance to, many of the drivers and needs that motivated me, and seem to motivate so many people around me, just don’t seem important any more.

Love is all that matters

Although the days and weeks that followed my cardiac arrest are, if I’m honest, a bit of a blur, the biggest thing I recall is being surrounded by enormous and overwhelming amounts of love and support. People went so above and beyond to help; organising and paying for flights and hotels for me and my loved ones, sending flowers and gifts, messaging, calling and checking in.

The way I feel about it all is a bit like that opening scene from Love Actually when Hugh Grant is talking about the arrivals area at an airport and how all you see is love everywhere.

On Day 4 in ICU I did a LinkedIn post sharing what had happened to me and urging people to be aware of how hard they are pushing themselves and to #slowthefuckdown, The response was incredible – literally tens of thousands of people from across the world sending me love and well wishes.

In fact, as Sherilyn Shackell keeps telling me, this post “broke LinkedIn”, reaching 9 million views, receiving an astonishing 90k reactions and close to 9k comments. So it’s clear that my message really hit a chord with people; that my description of a hard working parent of 4, stretching herself way too thinly and not paying attention to her body made people stop and think. And this is why I am so keen to share this new perspective.

We spend too much time working. Fact.

Let’s focus on the big one. Work. Like many of my peers, I have worked since I was 15 years old, when I used to sell jeans on a Saturday in glamorous North Finchley. I earnt £14 a day and whoever got top sales earnt a bonus of £3. And boy did I work my arse off to get those extra £3 (it bought you a lot in those days!). Or perhaps it wasn’t for the money it was the kudos of being top sales person? Looking back and knowing what has made me tick all these years I think that was probably more of a driver.

And that is how so many of us approach everything we do. We push ourselves to beat the numbers, drive the performance, achieve growth, do everything better, bigger, faster, louder…..! Sacrificing sleep, trying to run on empty… Then get the first day of our holiday and our bodies shut down. I can’t tell you how often I’ve spent boxing day in bed with a cold or flu.

And don’t get me wrong, this has been a strategy that works. Many of us are lucky enough to have established careers, financial well-being and undoubtedly a huge amount of pride in our achievements and it’s given us tonnes of joy along the way.

But I can’t help wonder if it ever ends!! Do we ever feel like we’ve arrived? At what point do people feel they have done enough, been enough, been seen enough.

For me, this is one of the biggest changes. I still want to achieve success and drive change and growth for both people and business, but I have lost the “panic” that I now realise had been driving me. I can see now that I was fueled by a fear that if we didn’t beat last year’s turnover, if we didn’t win every piece of business, if everyone of my clients wasn’t flying… It was quite simply an unmitigated disaster.  And I feel that from the people around me too. This abject fear that they’re not good enough, not enough, that they’re letting people down.

Undoubtedly this is driven by the crippling imposter syndrome so many successful people are battling internally as well as the culture of “win:lose” that exists in our industry; success is measured by output and can only be achieved in pitches, awards, results, NPS scores…. rather than by input; energy, focus, kindness, ethics, integrity….

My focus now is so much more input driven and humanity-led; ensuring the people around me are happy and fulfilled, rewarded and supported. And at peace. And that feels REALLY good. Wouldn’t it be wonderful if we lived in a world where people were measured against the way they did things, not just what they did? Cannes Lions rewarding ethical company culture not just great adverts, pitches only focused on chemistry sessions so agencies had to focus on relationships and didn’t have to break their backs (and their banks!) to win the business. A world where it’s the norm to acknowledge those key team members who do the right thing even though they don’t achieve the numbers.

The cultural fabric has always been important to me but my new perspective has highlighted that even more and also had an impact on the work I want to do. For the first time rather than chasing the money I am more focused on connecting with what I love; which is all about the people! I have realised how important it is for us as an organisation to be working with the right people; people who match our values and share our passion for creating the right brand and culture for people to thrive in. And then ensuring that culture, that philosophy designed to keep people happy and motivated, is actually being brought to life in the lived experience (or climate) of the team.

It seems that employee well-being is high on the agenda at the moment but often organisations default to the ticking of boxes rather than actual caring for their teams, an example of that being the recent trend of allowing everyone a “Foundation Day”; an additional day off – which does nothing to actually address the overwhelming workload or stress.

Before May, like many of us, it wasn’t unusual for me to have days where I literally didn’t stop; hours in back-to-back meetings, managing different time zones from early til late, forgetting to exercise, eat or breathe! However, in the immediate aftermath of my cardiac arrest I was forced to take a huge step back from the business, let the team take the reins and only went to meetings that were absolutely necessary for about 3 months.

And amazingly the world didn’t end! What happened to those back-to-back days, with no time to take a pee break til 3pm? How come I was able to run a business working for about one day a week? Of course in no small part because my team is amazing but also because so often we tell ourselves that the world will end if we’re not there – put undue pressure on ourselves and drown ourselves in guilt if we’re not there for everything and everyone, all the time.. And it’s JUST NOT NECESSARY!

Today, I am now back at work but only 3 of those days involve meetings  – I have a day a week clear to write, think and catch up – or disappear to the gym or a spa if I fancy – and Fridays are a non-negotiable day off so I can get on top of life admin and make sure I am there for the kids.

I also prioritise workouts, ensuring I get the right nutrition and sleep and pay much closer attention to what my body is telling me.

And as for the kids (4 of them in total!) I’m sure it goes without saying that they of course are more my priority than ever. So many working parents I know suffer from the feeling they’re slightly failing at everything; wracked with guilt at the missed school trips, assemblies and bathtimes as much as the days we have to rush out the door to make pick up or parents evening.

Having two step-kids in their late teens/early twenties, (and it feels like a minute ago they were 7 and 9!) I know only too well how quickly the years go so it is my intention to make this time count and say no to the networking dinners if it means I go another day where the only time i have spent with the kids is the hellish hour in the morning before school.

Recently I read a LinkedIn post by an amazing lady who is suffering from terminal cancer; she wrote that she intended to spend what time she had left not climbing mountains and doing bunji jumps, but staring at her children and touching her partner. This resonated with me so incredibly. I don’t need to win awards and smash targets to feel happiness. With my new lens I have no doubt that actually, all that matters is love!
So this is the new Emma Harris not a NDE but AC2L (another chance to live!)… no longer rushing around at a million miles an hour… all about love and doing the right thing and paying much much closer attention to her mind and body. Just like when brands discover things aren’t working they know that it’s time for either a rebrand or a pivot, it’s been time for me to have a rethink, consider what’s most important and definitely #slowthefuckdown. 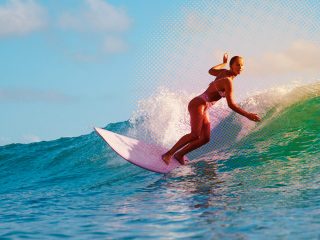